ET fees: Ministry of Justice keeps us in the dark

Posted on October 17, 2016 by wonkypolicywonk

Q: How many Ministry of Justice ministers does it take to change a lightbulb?

A: The Ministry’s plan for changing the lightbulb will be published in due course.

Yep, when it comes to its internal review of the justice-denying employment tribunal fees introduced in July 2013, the Ministry of Justice sure likes keeping us in the dark. Finally launched on 11 June 2015, some 14 months after Coalition (well, Liberal Democrat) ministers first started using the review as a fig leaf by suggesting it was just around the corner, the review team had produced a report by early last October. However, 12 months on, that report is still sitting on ministers’ desks, despite the then junior minister, Dominic Raab, telling MPs as long ago as 4 July that he anticipated publishing it “in the near future”. And, by mid-September, ‘in the near future’ had regressed to “in due course”.

In recent weeks, I’d started to wonder whether ‘in the near future’ and ‘in due course’ actually mean ‘not before the Supreme Court has heard Unison’s appeal in its twice-rejected judicial review challenge, on 7 and 8 December’. In other words, it’s all Adam Creme’s fault. But then we learnt that the Supreme Court hearing dates have slipped back to 27 and 28 March next year. And the Ministry surely can’t stretch the definition of ‘in the near future’ to ‘nine months from now’? Or can it?

Time will tell, but with memories of the damning criticism of the fees regime by both the Justice and the Women & Equalities committees of MPs – as well as by a whole load of the kind of person Michael Gove says we’ve all had enough of – becoming dimmer with every passing week, here is a summary of the options for the Ministry, and the associated issues its review report will need to address if it is to have any credibility at all.

This would make a lot of employment lawyers (and judges) very happy, but it seems somewhat unlikely, and the omens are not good. For outright abolition would come with a price tag of some £20 million per year – £8 million or so in lost fee income, and up to £15 million in increased operational costs (due to the inevitable rise in claim/case numbers). And, as noted previously on this blog, that’s £20 million that the Ministry would appear not to have. It is presumably for this reason that, just last month, the Ministry confirmed it is to press ahead with indefensible increases of up to 500% in immigration & asylum tribunal fees.

This would be the sensible option. As I have demonstrated previously, much if not all of the above £20 million could be covered by a combination of (much) reduced fees for claimants, the introduction of (equally modest) fees for respondent employers to defend a claim/case, and a (more substantial) ‘polluter-pays’ financial penalty for employers found by a tribunal to have breached the claimant’s rights. Yes, there might be some (unjustified) squeals from the employer lobby groups, but with the availability of (free) early conciliation by Acas there is no good reason why an employer should not pay a nominal fee to defend a tribunal claim, and even the British Chambers of Commerce has previously accepted that, if claimants have to pay (even nominal) fees, it is only “fair” for losing employers to have to pay “an analogous administration fee to the Treasury”.

However, justice secretary Liz Truss has so far given little indication that she wishes to develop a reputation for being sensible.

The prevarication and delay in concluding the Ministry’s internal review would suggest this is the option favoured by ministers, and that they simply want Unison’s pesky judicial review safely out of the way before they break this policy wonk’s heart. However, if they are not to leave prime minister Theresa May’s (loudly proclaimed) commitment to greater equality – including in the workplace – looking just a tad hollow and cynical, they will need to try and explain away the loss to fees of more than 60,000 single ET cases alone since July 2013, and in particular the loss of cases involving a claim for discrimination. (And yes, since you ask, that figure is based on a projection that takes into account the mild, pre-existing downward trend in case numbers, as well as the improving economy, global warming, and changes in the price of fish). 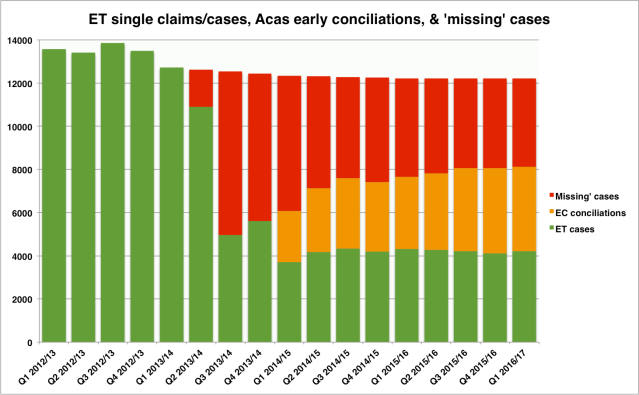 That figure increases by some 4,000 with every passing quarter, even if we assume – and it’s a highly questionable assumption – that every single one of the 4,000 or so single cases successfully resolved by Acas early conciliation each quarter would otherwise have resulted in a tribunal claim. For, as Acas’ early conciliation caseload far exceeds the number of ET cases we could expect, had fees not been introduced, it seems more likely that at least some of those early conciliations are of ‘disputes’ that would never have gone to tribunal in any event.

In short, the existence of Acas early conciliation does not get ministers off the hook. And there’s absolutely no evidence to support the contention of the Daily Mail, the Daily Express and Matthew Hancock MP that all the ET cases ‘lost’ to fees are simply weak or unfounded cases that should never have been brought in the first place.

If they go for this option, ministers will also need to explain why they are content for their fees to impact most on relatively low-paid, often vulnerable workers subject to the kind of employer abuses covered by the lower level (Type A) fees, such as the non-payment of wages (i.e. wage theft) or holiday pay. According to the Ministry of Justice, in 2010/11 the majority of ET claims (62%) fell into this category. But in 2015/16 only 24% of issue fees requested from claimants were in relation to Type A claims.

But who thinks Theresa May’s stated commitment to greater equality is genuine?

Wonkypolicywonk is a policy minion, assigned wonky at birth, who has in the past been lucky enough to work for one of the very best MPs in the House of Commons, and before that at Maternity Action, Working Families, Citizens Advice, the National Audit Office, the Law Society, and Amnesty International UK.
View all posts by wonkypolicywonk →
This entry was posted in Justice and tagged Acas early conciliation, Employment tribunals, ET fees. Bookmark the permalink.