Posted on April 6, 2016 by wonkypolicywonk

I’ve been feeling bad that my last post was a tad, well, unreadable. So this is the condensed version. With charts (see, I do love you, Gem).

So, the question is: Has the introduction of Acas early conciliation been (a) successful; and/or (b) a good thing for workers’ access to justice, to set against the justice-denying impact of the hefty employment tribunal fees introduced in July 2013?

Which begs a further question: What does ‘successful’ mean?

Fortunately, that further question is easy, as the Government has already answered it, on page 38 of its February 2014 Final Impact Assessment on the introduction of Acas early conciliation:

Has early conciliation caused a reduction in employment tribunal cases since its introduction in April 2014? As the following chart shows, there has indeed been a (relatively small) decline in the monthly number of single ET claims/cases since April 2014. If we ignore March 2014, when there seems to have been a rush of such cases to beat the introduction of early conciliation (just as there was in July 2013, to beat ET fees), the monthly average number of single claims/cases has fallen by 15 per cent, from 1,703 over the five-month period October 2013 to February 2014, to 1,447 over the most recent six months for which figures are available, July to December 2015.

According to that 2014 Impact Assessment, Acas early conciliation was supposed to bring about a 17% fall in ET case numbers. So, job done, everyone can go home.

Of course, just as junior injustice minister Shailesh Vara argues that the steep fall in ET case numbers from July 2013 was caused by factors other than the introduction of hefty ET fees in July 2013, it could be argued that the relatively small decline from April 2014 was caused by … oh, I don’t know, maybe global warming or something.

Whatever, since April 2014, Acas early conciliation has acquired a further objective, one not mentioned in that Impact Assessment: providing the Ministry of Injustice with a fig leaf for that sharp fall in ET case numbers from July 2013. There has been no denial of access to justice, says Mr Vara (in his oral evidence to the Justice committee of MPs, on 9 February this year), because everyone can go to Acas and have their potential ET claim conciliated. For free!

The problem is, not everyone does get their potential ET claim conciliated by Acas. We can see this in the following chart. 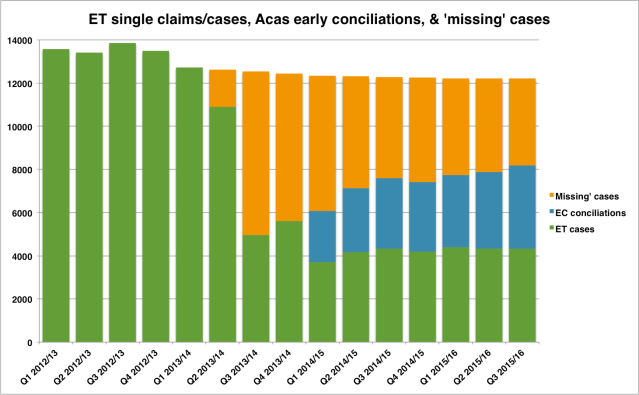 In short, Acas early conciliation provides the naked Mr Vara with a less than adequate fig leaf for the justice-denying impact of ET fees. Yes, I know, that’s a truly horrible image.

At this point, Mr Vara would probably ask to ‘phone a friend’, and everyone’s favourite mathematical genius, Cabinet Office minister Matthew Hancock MP, would explain to us that all 49,937 ‘lost’ ET claims/cases were vexatious or otherwise unfounded claims that should never have been brought in the first place. He might even aver that all 49,937 workers went to Acas, only to be told that their potential ET claim was in fact a pile of pants.

However, if that were true, then removing such vast numbers of weak or hopeless cases from the ET system would have sent the overall success rate of ET claims rocketing up towards 100 per cent. And, sadly for the Hancock Theorem, the very opposite has happened – the overall success rate has fallen since mid-2014, when claims made post-July 2013 began to dominate the outcome statistics.

Sadly for him – and for anyone within sight – Mr Vara’s fig leaf is vanishingly small.

Wonkypolicywonk is a policy minion, assigned wonky at birth, who has been lucky enough to work for two of the very best MPs in the House of Commons, and for Maternity Action, Working Families, Citizens Advice, the National Audit Office, the Law Society, and Amnesty International UK.
View all posts by wonkypolicywonk →
This entry was posted in Justice, Workers' rights and tagged Acas early conciliation, Employment tribunals, ET fees. Bookmark the permalink.