ET awards: looks like we’ve got us a trend thingy

Posted on September 10, 2016 by wonkypolicywonk

Six months ago, I noted on this blog that, in 2014/15, there had been a marked increase in the median awards for unfair dismissal or discrimination (the only jurisdictions for which the lackadaisical HMCTS bothers to record the relevant data). And I suggested that this might be the beginning of a sharply upward trend, due to the justice-denying fees introduced in July 2013 having eliminated many lower value unfair dismissal and discrimination claims.

Well, this week we got the figures for 2015/16, in amongst the latest set of quarterly ET statistics, for Q1 of 2016/17. And, as the following chart shows, we do appear to have what Sean Jones QC would call a trend thingy. 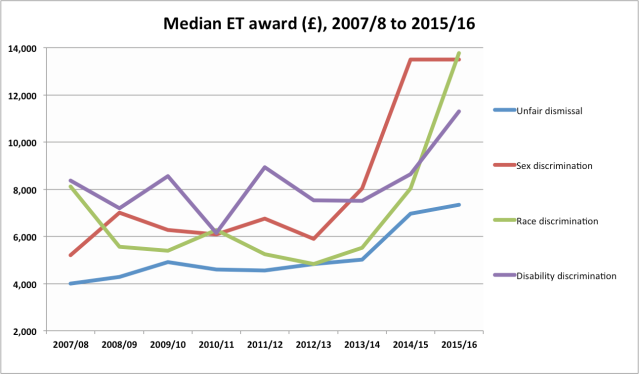 If you’re reading this and you’re a junior minister at the Ministry of Injustice, you are no doubt thinking, ‘ah, but lots of people are now getting their claim for unfair dismissal or discrimination resolved by Acas, for free!’. Which is true, to some extent at least. But, crucially, while the quarterly ET statistics have always told us the number and outcome of claims in each jurisdiction, the quarterly Early Conciliation statistics issued by Acas are not broken down by jurisdiction. So it’s hard to know to what extent Early Conciliation by Acas is successfully mopping up the lower value unfair dismissal and discrimination claims and awards lost to fees.

Now that Early Conciliation by Acas plays such a significant part in the ’employment dispute resolution’ system, that is a serious shortcoming that Acas needs to fix.

Wonkypolicywonk is a policy minion, assigned wonky at birth, who has been lucky enough to work for two of the very best MPs in the House of Commons, and for Maternity Action, Working Families, Citizens Advice, the National Audit Office, the Law Society, and Amnesty International UK.
View all posts by wonkypolicywonk →
This entry was posted in Justice and tagged Discrimination, ET awards, ET fees, Unfair dismissal. Bookmark the permalink.