So, today the Ministry of Injustice coughed up the latest set of quarterly employment tribunal (ET) statistics, covering the period October to December 2015 (Q3 of 2015/16). The days when each new set of these statistics was eagerly anticipated and swiftly pounced upon as evidence of the (predicted) impact of ET fees now seem an awfully long time ago, and it’s fair to say that, these days, the statistics amount to little more than a reasonably effective cure for insomnia. But I have to pursue my doomed quest to win the heart of Gem ‘The Doctor’ Reucroft somehow. So, here are a few charts.

Never mind the denial of justice, feel the stability! Great for HMCTS management planning. In Q3 of 2015/16, there were 4,338 single claims/cases, just seven fewer than in Q2, when there just 58 fewer than in Q1. Such uniformity is quite remarkable, and suggests ET claim/case numbers really have hit rock bottom. 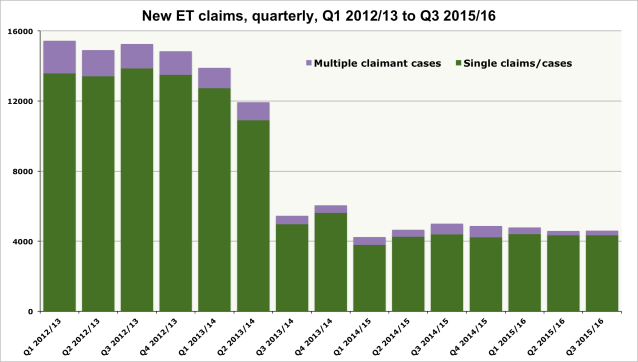 The Hancock Theorem really is a load of cock and bull

Armed with today’s set of statistics, we can hammer a few more nails into the coffin of that wonder of Tory intellectual thought, the Hancock Theorem of Vexatious ET Claims.

According to the second cleverest member of the Government – I’m sure Matthew Hancock himself would concede top place to that titan of intellect, injustice minister Shailesh Vara – the success rate of ET claims should by now be bobbing around at or just below 100 per cent, all the vexatious and otherwise unfounded claims having been cleverly weeded out by the hefty, upfront fees introduced by the also very clever Chris Grayling in July 2013.

Unfortunately – not that the Cabinet Office minister gives a flying fuck – the Hancock Theorem has not been supported by the Ministry of Injustice’s own figures, even when taken in context. These have so far indicated that, far from going through the roof, the success rate has in fact fallen significantly since mid-2014. Oops.

Once again, in what is the seventh quarter since we could first have expected to see the impact of fees reflected in the outcome figures, the overall success rate – that is, including claims conciliated by Acas, or withdrawn/settled – is well down on pre-fees levels, at 63%.

At 10%, the narrow measure of success is also significantly below pre-fees levels – and certainly is not zooming towards 100 per cent, as the Hancock Theorem predicts. And, at 37%, the proportion of unsuccessful claims is once again significantly up on pre-fees levels, despite all the weak and vexatious claims having been weeded out by fees. 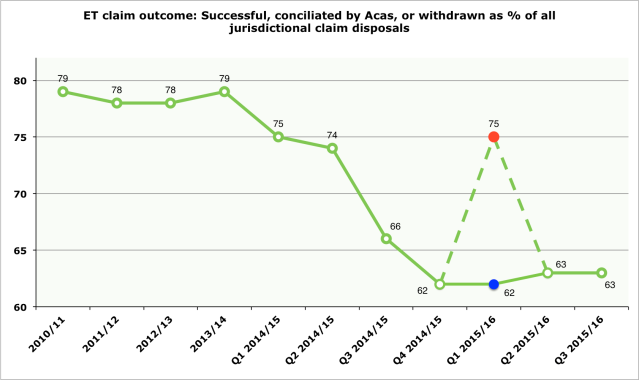 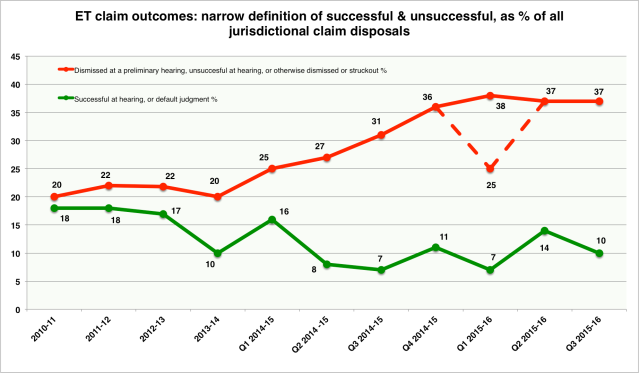 Given that the Ministry statistics on which the above charts are based are highly selective, are taken in isolation and are 150 per cent out of context, I can’t really be arsed to explain the dotted lines in Q1 of 2015/16. But if your insomnia is really bad or you just really need to know, all is explained here.

As of the end of December 2015, the number of single ET claims/cases ‘lost’ to fees since July 2013 was somewhere between 57,225 and 64,542. But then my projections are so selective and out of context. And, in any case, according to the Hancock Theorem, not one of those 57-64,000 claims would have been well-founded.

Yes, that’s right. For the famed Hancock Theorem to be correct, the Ministry of Injustice calibrated the level of their ET fees so precisely as to weed out up to 64,500 vexatious and otherwise unfounded ET claims without denying access to justice to one single exploited or unfairly treated worker. Not one. 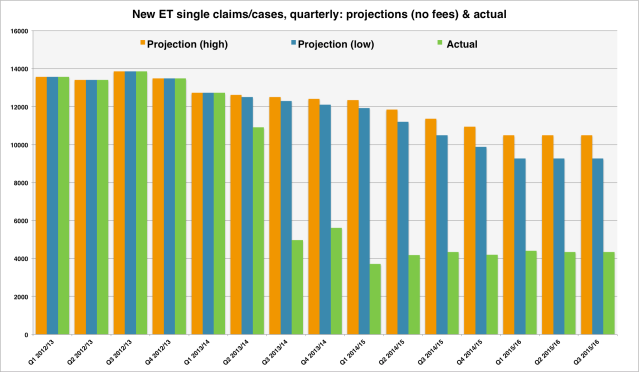 Wonkypolicywonk is a policy minion who has in the past been lucky enough to work for one of the very best MPs in the House of Commons, and before that at Maternity Action, Working Families, Citizens Advice, the National Audit Office, the Law Society, and Amnesty International UK. He's now back with the fab feminists at Maternity Action.
View all posts by wonkypolicywonk →
This entry was posted in Justice and tagged Employment tribunals, ET fees, Hancock Theorem. Bookmark the permalink.