How soon is now? Ministry of Injustice needs more time to work out the bleedin’ obvious.

Two months ago, I was daft enough to venture on this blog that Michael Gove – everyone’s favourite justice secretary – might be close to concluding his Ministry’s snail-like review of the justice-denying employment tribunal fees introduced in July 2013. The review report had by then been on Gove’s desk for four months, and it’s hardly a matter of rocket science. But I noted a teeny-weeny problem: the Ministry has no dosh to pay for a substantial reduction in the level of the fees, let alone full abolition.

Then, one month ago, I was tempted to write a blog post about the feeble performance of Gove’s junior minister, Shailesh Vara, when giving oral evidence on the impact of the fees to the Justice select committee of MPs, on 9 February. But then I found some drying paint to watch, and realised I couldn’t be bothered to count how many times the imbecilic Vara had told the MPs about the 83,000 early conciliation cases handled by Acas.

However, just in case you, dear reader, happen to be a member of that committee of MPs, here’s a chart showing how successful Acas early conciliation has been in cutting ET case numbers since its introduction in Quarter 1 of 2014/15 (that’s the column on the far left). 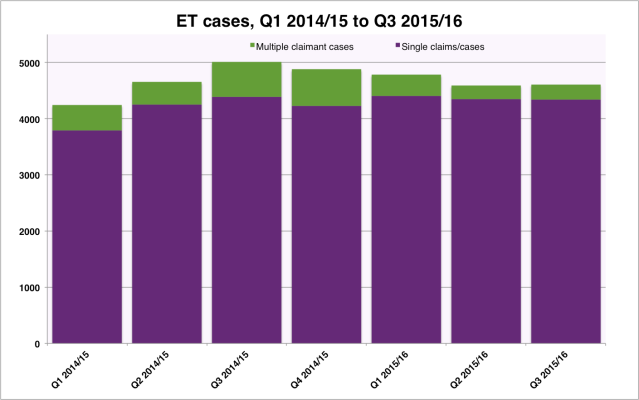 Anyway, back to this week, and the long-delayed publication of the final reports of the joint BIS/EHRC investigation of pregnancy and maternity discrimination in the workplace. These reports should have been published in the autumn, and their non-appearance by the end of February caused the chair of the Women & Equalities committee of MPs, Maria Miller, to write to business secretary Sajid Javid to ask what the fuck was going on.

Whatever the fuck was going on, the final reports include an EHRC paper setting out ‘recommendations for change’. And among these was a frankly somewhat underwhelming recommendation that the Government, “in light of the findings of [the Ministry of Injustice’s] review, make changes to the employment tribunal fee system to ensure that fees are not a barrier to accessing justice for women experiencing pregnancy and maternity discrimination”.

Is this some kind of coded message? Has the EHRC seen the review report that’s been sitting on Michael Gove’s desk for the last six months? I have no idea. I’m just a policy wonk. I don’t do coded messages. That’s for the big girls and boys.

But I have read the Government’s equally pathetic response. You can too – they have so little shame they put it online. This states, in rejecting the EHRC’s effete recommendation that they “make changes” to the ET fees regime,  that “it is too soon to consider whether any action is needed here”.

Too soon? Not just to take action, but even to “consider whether any action is needed”. Yeah, like it’s too soon to consider whether England didn’t win the 2015 Rugby World Cup. The All Blacks may yet get disqualified en masse for being too big, and too good. It may yet emerge that Wales fielded players who don’t have a Welsh grandmother. Maybe the entire Australia team was on drugs. And Acas handled 83,000 early conciliation cases.

Have I mentioned Acas early conciliation? 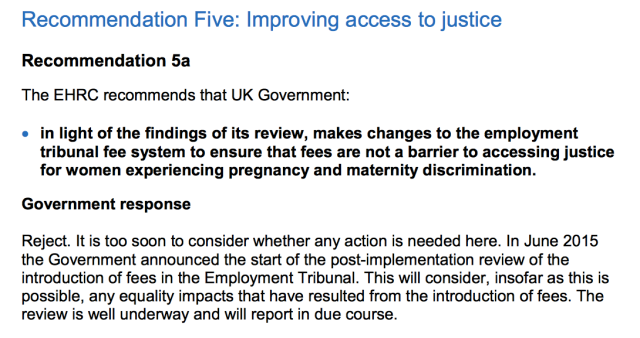 Wonkypolicywonk is a policy minion, assigned wonky at birth, who has been lucky enough to work for two of the very best MPs in the House of Commons, and for Maternity Action, Working Families, Citizens Advice, the National Audit Office, the Law Society, and Amnesty International UK.
View all posts by wonkypolicywonk →
This entry was posted in Justice, Workers' rights and tagged Acas early conciliation, Employment tribunals, ET fees. Bookmark the permalink.