Posted on March 8, 2018 by wonkypolicywonk

So, with today’s publication by the Ministry of Injustice of the latest set of quarterly tribunal statistics, giving us five full months’ worth of ET claim/case statistics since the Supreme Court did the High Court’s job for it and ruled ET fees unlawful, we now know that just under 3,000 new cases per month is the new normal. In other words – as countless law firms will no doubt be informing their employer clients in highly excitable emails today – the new normal is just about 100% higher than the old normal. 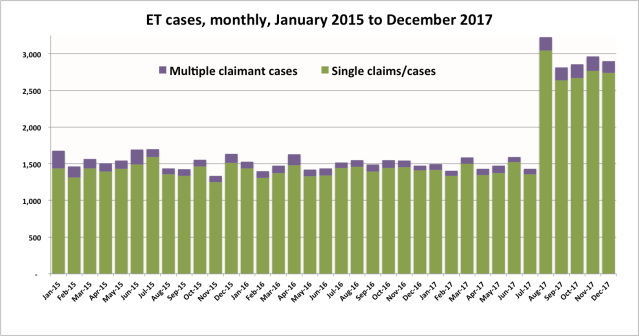 Which looks and sounds pretty dire. Stop hiring, employers!!! Those new employees will only take you to the Tribunal.

Except that, the new normal is only 100% higher than the old normal because, thanks to ET fees, the old normal was a pretty small number. That’s the way statistics work. As we can see from the following chart, a 100% increase in a pretty small number does not compensate for a 65% fall from a much bigger number. (I know you’ll be struggling to follow this, if you’re a High Court or Court of Appeal judge, but … well, just book yourself on a training course).

Yes, the number of ET cases is up 100% since July 2017. But it is still quite a bit lower than it would be, had ET fees and mandatory Acas early conciliation not been introduced in July 2013 and May 2014 respectively. And most of the difference is explained by the (positive) impact of that Acas early conciliation. It will be interesting to see if this remains the case over the coming months.

So, let’s not get too over excited (I’m looking at you, Peninsula Business Services). On average, even after that 100% increase, each of the UK’s 1.3 million employers now faces an ET claim just once every 37 years. But then the UK’s managers are a bit rubbish.

And maybe what we should be concentrating on is the inability of the much denuded ET system to cope with a sudden 100% increase in the number of cases. Because, let’s face it, Tory ministers are more likely to reach for a new fees regime than they are to green light an increase in judicial and administrative resources.

Wonkypolicywonk is a policy minion, assigned wonky at birth, who has been lucky enough to work for two of the very best MPs in the House of Commons, and before that at Maternity Action, Working Families, Citizens Advice, the National Audit Office, the Law Society, and Amnesty International UK. Oh, and at McDonald's.
View all posts by wonkypolicywonk →
This entry was posted in Justice, Workers' rights and tagged Access to justice, Employment tribunals, ET claims, ET fees. Bookmark the permalink.