Posted on September 24, 2017 by wonkypolicywonk

The much belated but very welcome victory for common sense and the common law – the latter being a fairly straightforward legal concept seemingly long forgotten by the allegedly planet-sized brains in the High Court and Court of Appeal – delivered by the Supreme Court on employment tribunal (ET) fees in July was always going to generate a backlash from the more intellectually-challenged sections of the employer lobby. For Pavlov’s dogs had nothing on these monotonous motor mouths.

Step forward Mark Littlewood, the rather grandly named Director General of the Institute of Economic Affairs, a once influential but now mostly ignored think tank.

On 28 August, Littlewood used an article in the Times to have a pop at the HR profession. And, in this prize example of propaganda masquerading as informed opinion, Littlewood made two stand-out statements about the cost to employers of dealing with ET cases.

One of these statements – a supposedly “illustrative” but absurdly atypical example of an ET case in which an unidentified employer allegedly spent £50,000 on legal fees alone to defend a claim worth just £15,000 – was swiftly and ably tackled by employment lawyer and blogger Darren Newman. In a nutshell, it’s easy to see why the employer now insists on anonymity. Who would want to admit to being so stupid as to be so badly scammed by dodgy lawyers?

(In fairness, I should acknowledge that, on Twitter, more than one employment lawyer vigorously defended their right to charge a client £50K to defend an ET claim worth just £15K. The words of Mandy Rice-Davies come to mind.)

However, my eye was drawn mostly to Littlewood’s claim that:

The average cost of defending tribunal litigation is calculated by the British Chambers of Commerce to be about £8,500. With more than 80,000 such applications [sic] every year, businesses [sic] are shelling out £700 million in legal fees alone. Given the Supreme Court has recently struck down the government’s policy of charging a modest fee for complainants, we can expect this number to rise.

And you do not have to be a maths genius to see that Littlewood got his ‘£700m’ figure by multiplying £8,500 by 80,000 (to get £680m, then – as will become clear later – adding a bit for ‘inflation’, because the BCC’s £8,500 figure dates from 2011). For this is the clear meaning of the first two sentences of the paragraph above. Certainly, no other figures are cited in that paragraph, and Littlewood did not demur when Neil Carberry of the CBI indicated on Twitter that ‘80,000 x £8,500’ was how he interpreted Littlewood’s £700m figure.

However, leaving aside the fact that the BCC’s figure of £8,500 is more than twice the £3,800 figure cited by Coalition government ministers when seeking to justify their proposal to introduce ET fees in 2011, so might be just a teeny weeny bit over-egged, the key point here is that the BCC’s figure of £8,500 relates to the average cost of defending an ET case, not an ET claim. And, in 2016/17, according to the official tribunal statistics published by the Ministry of Justice (see Table C1 of Annex C), there were 18,119 – not “more than 80,000” – new ET cases (single claims/cases + multiple claimant cases).

Yes, Littlewood makes the classic rookie error of confusing ET cases, and ET claims. He’s not the first to do so, by any means – Vince Cable made the same mistake when he was business secretary in the Coalition government – and he surely won’t be the last.

There is also the fact that approximately one-third of all ET cases are brought against an employer in the voluntary or public sectors, not a private sector business. And, in such cases, there is no direct cost to ‘businesses’. So, that £154m is more like £100m. Or £46m, if you prefer the Coalition Government’s £3,800 cost per case to the BCC’s £8,500.

On Twitter, I sought to draw Littlewood’s intention to these facts, pointing out that even my teenage kids could find the official ET stats online. Littlewood’s response was to try and paint me as an evil parent for introducing my teenagers to government statistics. And, when I queried whether he was drunk when tweeting that response (at 00.13am), he first tried to suggest that the official ET statistics are false, then blocked me. At which point, I suggested on Twitter that Littlewood might have a rather small willy. 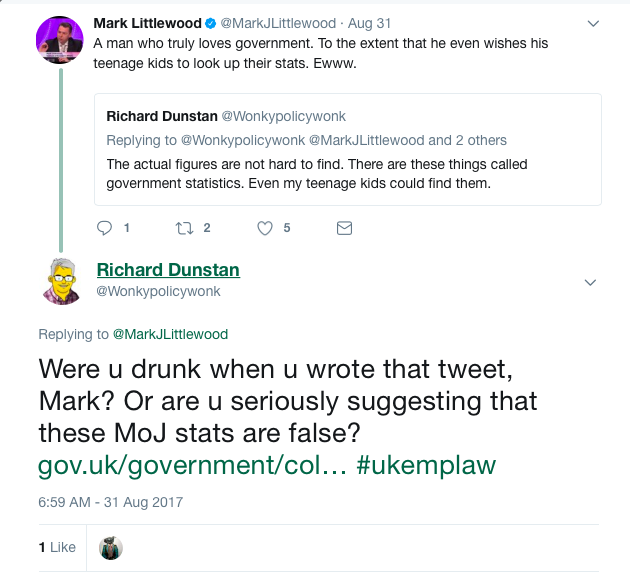 A few days later, Littlewood somewhat proved my point by sending a two-page letter of complaint to my employer, demanding an apology for my tweets.

By that time, it having proved impossible to get Littlewood to explain or evidence his £700m figure via Twitter, I had submitted a formal request for a correction of Littlewood’s article to the Times. And, on 15 September, I received a response from Rose Wild, the Feedback Editor at the Times. This rejects my request, and sets out the following justification for Littlewood’s £700m figure:

The number of claims moving to a full tribunal hearing is 18,119. However, even cases that do not move to full tribunals still impose significant costs on defendants.

The British Chambers of Commerce estimated in 2011 (from 2010 research) that the costs for defending a tribunal case was at least £8,500 on average. This number has been attributed in the article.

Since these figures are from 2011, adjusted for inflation the total would be more like £800m.

Curiouser and curiouser! Given the repeated use, as in Littlewood’s original article, of the meaningless term ‘tribunal applications’, it seems reasonable to conclude that this laughable new explanation of Littlewood’s £700m figure was written by none other than Littlewood himself, and that the Feedback Editor has simply swallowed it wholesale.

The second thing to note, of course, is that 18,119 is not “the number of claims moving to a full tribunal hearing” in 2016-17. As noted above, it is the total number of new cases (single claims/cases + multiple claimant cases). And only a minority of these cases will go to a full tribunal hearing – the great majority will be settled without a full hearing, and others will result in a default judgment (again, without a full hearing).

We can only guess where the figures of 70,357 and £5,400 come from, or what they represent, as they are neither explained nor sourced. Suffice to say, all the tribunal ‘applications’ (or cases) that “are not argued before [a] full tribunal” are already included among the 18,119 cases cited in the first (£154m) element of Littlewood’s total of £683m.

The third (£149m) element of Littlewood’s total of £683m is no less fanciful. Again, the figures of 55,172 and £2,700 are neither explained nor sourced, but there is simply no rational basis for adding the “cost of tribunal jurisdictional complaints” to the first element of £154m, as all such costs are already allowed for in the BCC’s average cost per case of £8,500.

Finally, the ‘adjusted for inflation’ total of £800m is either a typo, or inflation has been a lot higher since 2011 than I had previously noticed.

In short, the £380m and £149m figures that Littlewood adds to £154m in order to get the spurious total of £683m are simply creative figments of Littlewood’s imagination. Theresa May would be impressed, and I expect to see Littlewood put in charge of the Brexit negotiations any day now.

Does any of this matter? Well, in one sense, no. But, if we are to have a debate about how the ET system should be funded, if not by justice-denying claimant fees, then we need that debate to be based on facts, not the highly imaginative ramblings of controversialist Director Generals of fringe think tanks. [Significantly, perhaps, since I published this post the justice secretary, David Lidington, has declined to rule out re-introducing ET fees at some level in the future.]

So, I have renewed my request to the Times for a correction of Littlewood’s article, and await a further response from the Feedback Editor. I will update this post (or start a new one) when I receive that response.

Update [30 October]: So, the Times published a correction to Littlewood’s article on 17 October (but ‘forgot’ to tell me). If you look really, really hard, you might even be able to see it.

Wonkypolicywonk is a policy minion, assigned wonky at birth, who has been lucky enough to work for two of the very best MPs in the House of Commons, and before that at Maternity Action, Working Families, Citizens Advice, the National Audit Office, the Law Society, and Amnesty International UK. Oh, and at McDonald's.
View all posts by wonkypolicywonk →
This entry was posted in Justice, Workers' rights and tagged Access to justice, ET claims, ET fees, Institute of Economic Affairs, Mark Littlewood, The Times. Bookmark the permalink.