Posted on November 9, 2017 by wonkypolicywonk

In August, the Department for Business, Energy & Industrial Strategy (BEIS) named & shamed another 233 employers for non-compliance with the national minimum wage. Not surprisingly, press and media coverage of this round of naming & shaming – the 12th round since the scheme was rebooted in 2013 – focused on the list being topped by the household-name retailer Argos, which somehow managed to underpay 12,176 of its workers a total of £1.46 million.

As with the February 2017 round, however, no fewer than 62 (27%) of the 233 named employers are categorised in the BEIS/HMRC spreadsheet as “Non low-paying sector”. Yet simple internet research quickly reveals that these 62 employers include three in Childcare, three in Social Care, four in Construction, and 13 in Building Services. Maybe BEIS should have a word with HMRC about the quality of its categorisation.

More interestingly, and as with both the February 2017 and August 2016 rounds of naming & shaming, what the BEIS press release failed to say is that 48 of the 233 employers also paid further arrears of £1.27 million, to 18,201 workers, under the so-called self-correction mechanism quietly introduced by BEIS/HMRC in 2015. This information was only elicited by a written Parliamentary Question by Caroline Lucas MP (aka my boss).

Yet it seems reasonable to assume that most of the 48 are relatively large employers  – hence the payment of self-correction arrears to 18,201 workers, 17 times the 1,088 workers to whom the 232 named & shamed employers other than Argos between them owed arrears. More to the point, the 48 clearly include the worst offenders.

As the following two tables show, such self-correction arrears now account for the bulk of the arrears ‘recovered’ from employers through enforcement of the minimum wage, and cover far greater numbers of workers than direct HMRC enforcement. 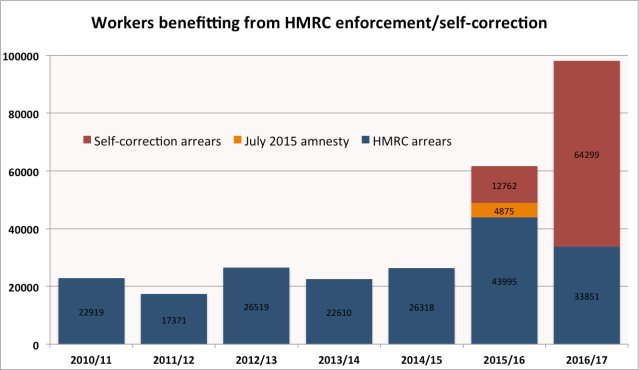 With the revelation, in September, that HMRC has written to 3,000 firms deemed to be at “higher risk” of non-compliance with the minimum wage, offering them an effective amnesty from financial penalties and naming & shaming if they fess up and self-correct the arrears owed, this imbalance seems set to become even more pronounced.

All of which begs the question, is it fair to name & shame (and impose financial penalties on) dozens of hairdressers and pubs for underpaying one or two workers a relatively small sum, when large, household-name employers can avoid both financial penalties and being named & shamed for the underpayment of comparatively vast sums to hundreds or even thousands of workers? By rights, that £6m of arrears self-corrected in 2016/17 should have attracted financial penalties of up to £12m.

Is it fair that the very worst offenders can evade the punishment handed out to non-compliant small fry? For it beggars belief that, almost 20 years after the introduction of the minimum wage, such extensive non-compliance by large, well-resourced businesses is due to technical error or misunderstanding of the law.

I’m not sure it is fair. It seems more like the slings and arrows of outrageous fortune. Maybe it is time for ministers to review the naming & shaming scheme.

Wonkypolicywonk is a policy minion, assigned wonky at birth, who has been lucky enough to work for two of the very best MPs in the House of Commons, and for Maternity Action, Working Families, Citizens Advice, the National Audit Office, the Law Society, and Amnesty International UK.
View all posts by wonkypolicywonk →
This entry was posted in Workers' rights and tagged Minimum Wage, naming & shaming. Bookmark the permalink.