It’s a shame about BEIS

Posted on February 14, 2020 by wonkypolicywonk

So, just like James Bond, naming & shaming of employers who breach the national minimum/living wage is back. Well, almost back. Having been suspended since the last round of naming & shaming in July 2018, pending the outcome of a ministerial review, the scheme will resume shortly, according to the Minister’s answer to a written Parliamentary Question on 23 January, and a report in the Financial Times on 11 February.

And, with the outcome of the ministerial review having now been published (see pp 18-23), the only remaining question is whether the next round of naming & shaming will come before the UK release of No Time To Die on 3 April. Except … well, the ministerial review has resulted in a few changes to the scheme, and the TUC, for one, is not happy. In its Valentine’s Day card to BEIS, the TUC notes that:

A controversial change to the rules means the minimum arrears threshold for naming and shaming will rise from £100 to £500. If this threshold had been in place under the old rules, it would have excluded about a quarter of cases.

Going forward, it will mean employers who deliberately try to shave relatively small amounts off minimum wage pay stay under the radar. Think cafes and bars demanding unpaid trial shifts, or home care providers who do not pay for travel between clients, for example.

The new threshold is simply too high – ministers must think again.

The lists of named & shamed employers published by BEIS have always had a long tail of relatively minor offenders. And it is a moot point whether the naming & shaming of such relative small fry – in addition to them having to pay the arrears owed plus a financial penalty – actually achieves very much, in terms of overall deterrence.

Then again, those who would have escaped being named & shamed in the last three rounds include the Wolverhampton Wanderers football club (which owed a total of £450.79 to 17 workers), the Derbyshire County cricket club (which owed £225.16 to one worker), and the London Irish rugby union club (which owed £131.73 to one worker). So it’s not true to say that none of the ‘small fry’ are household names, and the TUC is right to highlight that the naming & shaming scheme will now be even less transparent that it was.

However, in my view, the raising of the threshold from £100 to £500 pales into insignificance when set against the fact that, as previously noted on this blog, large employers who ‘self-correct’ sometimes substantial sums of arrears when challenged by HMRC already get away with not being named & shamed for those ‘self-corrected’ arrears (even if they are named & shamed in respect of smaller sums of HMRC-enforced arrears).

Having been quietly introduced by BEIS and HMRC in 2015, and never formally announced, such self-correction by employers now accounts for almost half of the arrears identified, directly or indirectly, by HMRC enforcement of the minimum wage.

Over the three-year period 2015/16 to 2017/18, no less than £16.5 million (45%) of the total of £36.8 million of arrears identified through HMRC enforcement was identified through such ‘self-correction’ (see chart below, sourced from Figure 9 on page 29 of the Low Pay Commission’s April 2019 report, Non-compliance & enforcement of the National Minimum Wage). 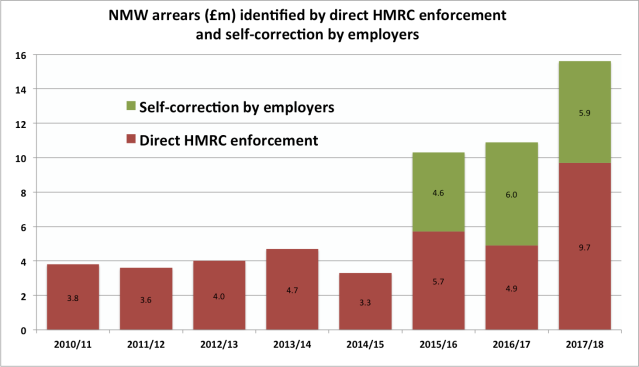 Yet not a single employer has been named & shamed in respect of that £16.5 million of arrears, and not a penny has been imposed in financial penalties. Which means those employers have evaded (and the Government has kissed goodbye to) up to £33 million worth of financial penalties (the current penalty rate is 200% of the arrears owed). That’s more than the current annual budget for enforcement of the minimum wage.

Strangely, the TUC doesn’t appear to be the least bit concerned about this, as the issue is not even mentioned in its complaint about the new £500 threshold. But, as I have asked previously on this blog, is it fair that the very worst offenders are thus able to minimise both their ‘shame’ and the sum of penalties imposed? Do the public not deserve to know the full extent of an employer’s disregard of the law? As things stand, we do not know the name of a single employer involved in cheating their workers of that £16.5 million.

“I’ve never been too good with names,” sang Evan Dando and The Lemonheads on the title track of their fifth album It’s a shame about Ray in 1992. Someone at BEIS should have a listen. Because not only does their naming & shaming scheme lack transparency – essential to the very purpose of the scheme – but it is not even being applied to the biggest and worst offenders.

Wonkypolicywonk is a policy minion who has in the past been lucky enough to work for one of the very best MPs in the House of Commons, and before that at Maternity Action, Working Families, Citizens Advice, the National Audit Office, the Law Society, and Amnesty International UK. He's now back with the fab feminists at Maternity Action.
View all posts by wonkypolicywonk →
This entry was posted in Workers' rights and tagged naming & shaming, National minimum wage, NMW enforcement. Bookmark the permalink.