Once again, there is some good news this morning for any underemployed employment lawyers, with the latest set of quarterly employment tribunal (ET) statistics, covering the period October to December 2019 (Q3 of 2019/20), showing yet another small increase in the number of single ET claims/cases.

In Q3, there were 10,887 new single claims/cases, up from 10,307 in the previous quarter (after allowing for the 1,700 single claims/cases that the Ministry of Injustice still says, in its commentary on the statistics, “will be reclassified as multiple claims once fully vetted”). This represents a 25% increase on the same period a year ago, and – as the following chart shows – the current trend is slowly but steadily upwards. 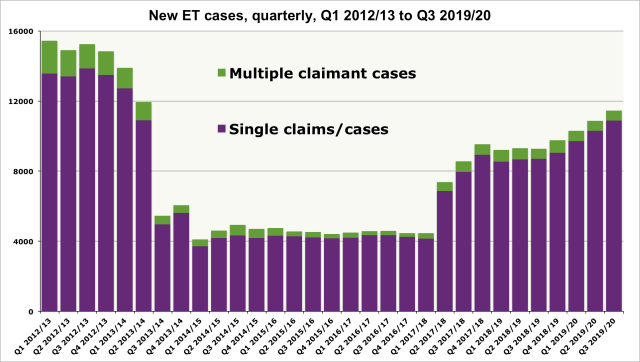 The number of disposals of single claims/cases also increased, to 7,098, up from 6,036 in Q2, and 5,610 in Q1. Which may mean the 58 additional ET judges recruited in April last year are having an impact. However, the Ministry notes that, at 33,000, the “caseload outstanding [i.e. single claims/cases + multiple claimant cases] has almost reached the peak levels seen in 2009/10 (when it was 36,000 in both Q2 and Q3 of that year)”. And the mean age on disposal of single claims/cases has continued to rise, to 36 weeks (six weeks more than in the same quarter a year ago). As the following chart shows, this has now risen steadily since late 2017. 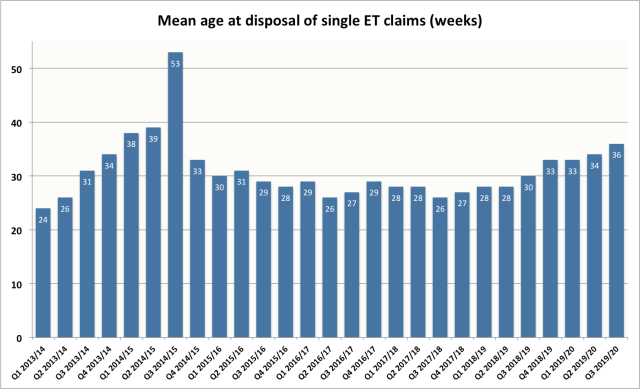 So, no wonder that, earlier this week, I heard someone describe the ET system as “creaking at the seams”.

Wonkypolicywonk is a policy minion, assigned wonky at birth, who has been lucky enough to work for two of the very best MPs in the House of Commons, and for Maternity Action, Working Families, Citizens Advice, the National Audit Office, the Law Society, and Amnesty International UK.
View all posts by wonkypolicywonk →
This entry was posted in Uncategorized. Bookmark the permalink.