New research: 95% of journalists don’t know their **** from their elbow

Posted on April 7, 2016 by wonkypolicywonk

Confirmation bias was much in evidence earlier this week, when a small tsunami of press and media reports of a new ‘research’ report by My Family Care on the little-loved Shared Parental Leave – and in particular the report’s headline ‘finding’ that there has been “just one per cent take-up so far” – had a lot of employment lawyers, wonks and HR specialists nodding along and tweeting their lack of surprise. Including me, initially. But then it was just after midnight when I read the Guardian article that had just appeared online, and I had drunk a certain amount of wine.

However, at about the same time, somewhere in Scotland, the former BIS employment relations minister and chief architect of SPL, Jo Swinson, was punching holes in walls and kicking the cat. NB: This may be an exaggeration. I don’t even know if Jo has a cat. She may well not have been in Scotland. But if spouting dubious ‘facts’ is good enough for My Family Care and the Women’s Business Council (who endorsed the ‘research’ report) it’s good enough for a humble blogger. Certainly, there was some wailing and gnashing of teeth in the Swinson household.

For Jo had immediately noticed what legions of journalists and news editors at the Guardian (“Tiny proportion of men are opting for shared parental leave“), the Independent (“Only 1% of fathers [sic] take opportunity to split time off“), Sky News (“just 1% of fathers [sic] have chosen to opt for Shared Parental Leave“), BBC Breakfast (“Shared parental leave: only 1 in 100 dads take what they’re entitled to“) and elsewhere failed to spot: that My Family Care’s ‘research’ is little more than garbage, and their ‘1%’ figure utterly bogus.

That is putting it mildly. It is in fact nonsense on stilts, and if there was any justice in the world My Family Care and the Women’s Business Council would now be spending a very, very long time on the naughty step. And a lot of journalists would be getting booked onto a refresher course at journalism school.

For, in any one year, the vast majority of male employees do not become a father, so simply cannot take shared parental leave, however much they might want to. As Jo Swinson later noted in the Financial Times, My Family Care might just as well have issued a ‘research’ report with a headline ‘finding’ that only a small minority of female employees take maternity leave.

According to the February 2013 BIS final impact assessment on SPL, there are about 540,000 maternities each year in which the mother has a partner who is a ‘male employee’ (i.e. she is not a lone parent, and her male partner is in employment). And it has been estimated by the TUC, Working Families and others that only about 60% of those 540,000 new fathers will actually qualify for SPL. So, in ‘SPL’s first year’, about 324,000 male employees became eligible for SPL.

And, according to the ONS, there are some 16.8 million males in employment in the UK. So, even if every single one of those 324,000 new fathers who were eligible for SPL in 2015/16 actually took SPL – that is, if take-up was 100% – that would still be only 1.9% of ‘all male employees’. (Yes, I know, not all ‘males in employment’ are ’employees’, but My Family Care don’t distinguish between employees, workers and self-employed contractors, so why should I?)

However, My Family Care’s 1% figure is not simply bogus – it also fails to reflect their own ‘research’ findings. Buried away on page 20 of the 26-page report is a chart showing that, among the (very small) number of male employees in their sample who had actually become a father in the last 12 months, more than 30% had taken SPL. More than 30%! Yes, the ‘research’ is so sloppy that My Family Care don’t even bother with the exact figure. Yet the Government’s own forecast (which we can safely say was optimistic) was just 2-8%.

Which begs the question, should My Family Care and the Women’s Business Council have issued a press release headlined “Shared parental leave a stunning success!”? To which the short answer is: No. Because, as just noted, the size of the sub-sample of employees interviewed who were new fathers is far too small to be meaningful, and we have no idea whether the 200 employers they selected are in any way representative (My Family Care didn’t bother to include any explanation of their ‘research’ methodology, perhaps because that would simply have confirmed how shoddy the methodology was).

This is not the first time that someone has used the device of paper-thin ‘research’ on shared parental leave to get their organisation’s name in the paper – indeed, My Family Care have form. And, given the evident gullibility/stupidity of so many journalists and news editors, I don’t suppose it will be the last. But, as the employment team at law firm Lewis Silkin noted on Twitter yesterday, “until there is good data, all anyone can say on SPL take-up is that it is somewhere between 0% and 100%”.

Postscript: At least some at the BBC have recognised the error/laziness of their colleagues, with Radio 4’s “More or Less” describing My Family Care’s 1% figure as “massively misleading” and “one of the worst statistics we’ve ever reported on”.

Postscript 2 [26 April]: Clearly feeling that he hasn’t provided us with quite enough entertainment, Ben Black of My Family Care has now written an hilarious defence of the report and its promotion: 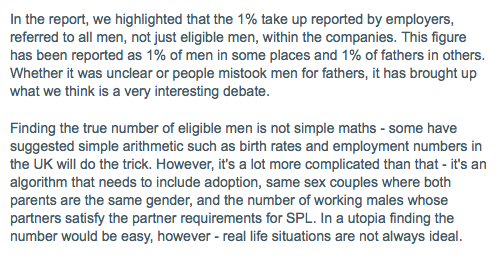 Wonkypolicywonk is a policy minion, assigned wonky at birth, who has been lucky enough to work for two of the very best MPs in the House of Commons, and for Maternity Action, Working Families, Citizens Advice, the National Audit Office, the Law Society, and Amnesty International UK.
View all posts by wonkypolicywonk →
This entry was posted in Equality and tagged Equal parenting, Shared parental leave. Bookmark the permalink.

3 Responses to New research: 95% of journalists don’t know their **** from their elbow