Posted on January 3, 2019 by wonkypolicywonk

So, the xmas break is over, and in Parliament the Brexit bullshit is about to start all over again – with knobs on. For my sins, I work in Parliament and, if I had a penny for everyone who asked me, over the break, ‘So, what’s going to happen with Brexit?’, I would have 12p. Which seems a tad unfair. My inside knowledge is surely worth more than 12p.

Except it isn’t. Because there is no inside knowledge. No one in Parliament has a clue what’s going to happen with Brexit. Which is not unrelated to the fact that few people in Parliament have a clue. They stupidly got us into this mess – with their brilliant, democracy-enhancing idea to ask the public to vote on whether the Government should build a submarine out of cheese – and now they have no idea how to get us out of it.

OK, to be fair, between them they do have a few ideas. It’s just that none of the ideas are any good. Norway Plus, Canada Plus Plus Plus, holding a People’s Vote or even a People’s Assembly, or winning a general election and negotiating a jobs-first Brexit – these are all crap ideas that will not get us out of this mess.

As Martin Sandbu has noted in the Financial Times, Norway Plus – under which the UK would remain in the European Economic Area by joining Norway, Iceland and Liechtenstein in the EFTA bloc – is less an idea for getting us out of this mess, than a category error. Because, under the meaninglessly vague, 26-page Political Declaration that goes with the 585-page Withdrawal Agreement so incompetently negotiated by Theresa May, David Davis and Dominic Raab, and which allows for “a spectrum of outcomes”, we can have Norway Plus as our future relationship with the EU if we want. It’s just that (a) the EU27 will have to agree to it, and (b) we can’t start the negotiations with them until after we’ve left the EU.

Oh, and the Norwegians aren’t very keen on the idea, because for them “it would be like inviting the rowdy uncle to a Christmas party, spiking the drinks and hoping that things go well. They would not.” But the key point is that the only way to get to Norway Plus, or to any of the other alternative future relationships, is to ratify the Withdrawal Agreement and Political Declaration that are on the table.

So, belatedly deciding that we want Norway Plus – or Canada Plus Plus Plus, or Corbyn’s ludicrous ‘jobs-first Brexit’ – as our future relationship with the EU wouldn’t solve our current dilemma, which comes down to deciding between just three options:

(a) ratifying the Withdrawal Agreement and Political declaration agreed with the EU27, leaving the EU on 29 March, and spending the next few years – perhaps the next decade – trying to negotiate our future relationship with the EU while continuing to argue amongst ourselves about whether we want that relationship to be Norway Plus, Canada Plus Plus Plus or some other arrangement;

(c) revoking the Article 50 notification (as the ECJ has recently confirmed we can do) and remaining in the EU on the same terms as now.

THERE. ARE. NO. OTHER. OPTIONS.

What’s more, despite it being the legal default option, ‘no deal’ is simply not a credible option. It might have been, just about, if we’d started on the necessary preparations two years ago. But we didn’t, so we are simply not in a position to avoid the economic chaos and public disorder that would now inevitably follow. The Government hasn’t put 3,500 troops on stand-by to go around handing out free plastic Union Jacks for everyone to wave at their post-Brexit street parties. The troops are on stand-by to shoot us when we join food riots. Plus, David Gauke – please don’t say you haven’t heard of him – says he might resign from government. Which is surely a clincher. (Seriously, it’s clear the Government would collapse before it could implement a ‘no deal’ Brexit on 29 March).

Which leaves just two options for MPs: signing off on May’s bungled, Blindfold Brexit, or revoking the Article 50 notification and cancelling Brexit.

Yet we are where we are because only a vanishingly small minority of MPs favour the first option. And, as far as I’m aware, not a single MP has explicitly come out in favour of the second option (though see below). Most of the MPs that you might expect to favour that option – because they do in fact favour revoking Article 50 and remaining in the EU – are instead still campaigning relentlessly for a People’s Vote (or ‘referendum on the outcome of the negotiations with the EU27’, if you’re not into politicians using disingenuous and arguably offensive euphemisms to hide their true intent). And the rest are busy calling for a People’s Assembly (or ‘sortition’), which worked well in ancient Athens, apparently.

Since it launched in April, the People’s Vote (PV) campaign has been phenomenally successful at – and deserves much credit for – mobilising public support for the idea of cancelling Brexit and remaining in the EU (you won’t find many PV supporters who want to leave the EU), and at getting the option of a PV onto the political and media agenda. Unfortunately, it has been markedly less successful at persuading unconvinced MPs that a second referendum is the way forward. Only about ten Tory MPs have come out in support, and that is simply not enough – which is why the cross-party group of pro-PV MPs has not (yet) tabled a PV amendment to the Meaningful Vote motion that was supposed to have been voted on by MPs on 11 December, and which may now be voted on in the week of 14 January.

There is also the seemingly small but actually quite significant problem of what the PV ballot question would be. The working assumption has been that it would be a binary choice between accepting the Prime Minister’s bungled, Blindfold Brexit, or cancelling Brexit and remaining in the EU. But that would effectively disenfranchise the not insignificant number of Brexiteers who do not support the PM’s deal. Which is a bit of a problem when the PV has been presented from the outset as “just basic democracy“.

And, while I agree 100% with Chris Grey when he says, in his first blog of 2019, that Brexit “misreads the realities of a regionalised and multi-polar world, and would be an historic abandonment of economic and geo-political strategy”, I’m still not convinced that this message would woo voters any better in 2019 than it did in 2016. I fear they’d be more impressed by a red bus carrying the already-selected Leave slogan “Tell them again!” As Stephen Bush notes in the New Statesman, “the media and cultural advantages that Leave had in 2016 are still alive and kicking in 2018” and “the resumption of political hostilities in the event of an actual referendum might yet end up with a more emphatic version of the answer the United Kingdom arrived at in 2016”.

However, even if they were to suddenly (and unexpectedly) recruit enough new supporters among their colleagues to somehow force a very, very reluctant Prime Minister to do a screeching hand-brake u-turn, the biggest problem for pro-PV MPs is that they have run out of time: it is simply too late to hold a PV now.

In October, in its report The Mechanics of a Further Referendum on Brexit, the UCL Constitution Unit established that it would take a minimum of 22 weeks to legislate and prepare for, and then hold, a PV campaign (which by law has to be 10 weeks long). No one has credibly suggested how that 22 week-minimum could be reduced, and the UCL team somewhat optimistically assumed that the draft legislation would sail through a suddenly united House of Commons in just a few days. So it has been clear for some weeks now that there is absolutely no chance of holding a PV before 29 March 2019, and that an extension of the two-year Article 50 period would be necessary.

However, the UCL Constitution Unit also calculated that the latest possible date for holding a PV without first having to hold the Euro elections scheduled for late May, is 16 May. In short, 16 May is the latest date that would allow the UK to hold postponed Euro elections in late June, in time to elect MEPs by the cut-off date of 2 July, should the PV result in a decision to stay in the EU. Whether the EU27 would (unanimously) agree to an Article 50 extension that long is a moot point, and certainly cannot be taken for granted, but in any case if you count back 22 weeks from 16 May you get to … 13 December. Which, as you don’t need me to tell you, was three weeks ago.

The only alternative is to seek an even longer Article 50 extension, hold our Euro elections in May (or June), as we would be legally obliged to do as an EU member state, and then hold a PV just a few weeks later. As this Twitter thread yesterday by ECJ Advocate General Eleanor Sharpston suggests, it’s doubtful that the EU27 would agree to such a lengthy extension, but … does anyone seriously think this would be a good idea?

No, the time for unicorns is over. It’s time for MPs to start dealing in concrete realities, and to tell the public the truth. Which, as Phil Syrpis of Bristol University has cogently argued, is that Theresa May has failed to deliver on her own (ludicrously rigid) interpretation of ‘the will of the people’, and the result of her efforts – the Withdrawal Agreement & Political Declaration – “falls far short of the claims made for Brexit in 2016”. And, as Syrpis further notes, “there is no time, or appetite on the EU side, for renegotiation.” Oh, and the whole damn thing has made the UK a global joke.

To put it more brutally, as the Tory MP and PV-advocate Anna Soubry (❤️) did back in early November, the “uncomfortable truth is that Brexit cannot be delivered. It’s time we all faced reality and were honest with the British people. We owe them a huge apology for a Referendum with an option that was undefined and undeliverable.”

It’s time for MPs to take back control, make that apology, and cancel Brexit.

But I’m not holding my breath. As has been noted by others, “one of the more disappointing aspects of this unnecessary national crisis is that no one seems to be willing to take any responsibility for it. It always seems to be someone else’s fault and no one ever says, ‘I’m sorry’.” So, to sum up just how badly we are being let down by our political class, here’s a photo of a muppet who thinks we can “leave with no deal and negotiate a free trade agreement during the transition period”. 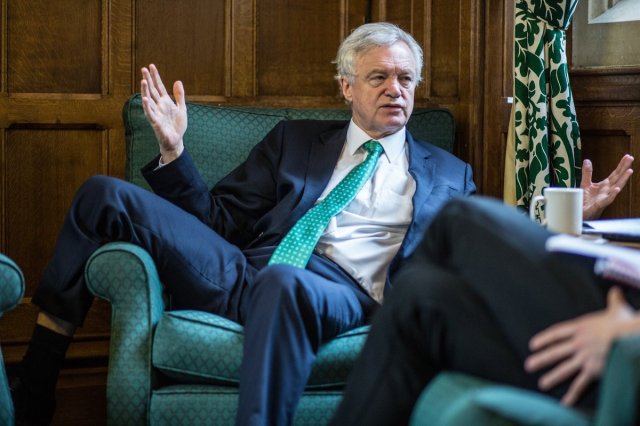 Wonkypolicywonk is a policy minion, assigned wonky at birth, who has been lucky enough to work for two of the very best MPs in the House of Commons, and for Maternity Action, Working Families, Citizens Advice, the National Audit Office, the Law Society, and Amnesty International UK.
View all posts by wonkypolicywonk →
This entry was posted in Brexit and tagged Brexit, EU, People's Vote. Bookmark the permalink.