Honey, I shrunk the NMW arrears

Posted on February 4, 2018 by wonkypolicywonk

As noted previously [Shurely ‘tediously’? Ed] on this blog, Tory ministers have not been slow to crow about their apparent success in fortifying HMRC’s enforcement of the national minimum wage (NMW) in recent years. In April 2016, the then business minister, Nick Boles MP, boasted to the House of Commons that

“we are enforcing the national minimum wage more robustly than any previous Government and will be enforcing it more robustly every year. In 2015-16, Her Majesty’s Revenue and Customs identified more than £10 million of arrears for more than 58,000 workers across the economy—three times the arrears identified in 2014-15 and for twice as many workers. I am delighted to be able to share with hon. Members that we will increase the HMRC enforcement budget to £20 million in 2016-17, which is up from £13 million in 2015-16 and from only £8 million in the last year of the Labour Government.”

And, in December last year, when announcing the latest round of naming & shaming of employers found by HMRC to have breached the NMW, then business minister Margot James stated:

“There is no excuse for not paying staff the wages they’re entitled to and the government will come down hard on businesses that break the rules. That’s why today we are naming hundreds of employers who have been short changing their workers; and to ensure there are consequences for their wallets as well as their reputation, we’ve levied [sic] millions in back pay and fines. Since 2013, the [naming & shaming] scheme has identified [sic] £8 million in back pay for 58,000 workers, with 1,500 employers fined a total of £5 million. This year the government will spend a record £25.3 million on minimum wage enforcement.”

However, there is increasing evidence that “levied millions in back pay” and “identified £8 million in back pay for 58,000 workers” does not mean that those 58,000 workers have actually received the £8 million owed to them by their thieving employers. Indeed, the evidence suggests that a significant proportion of that £8 million has never reached the pockets of the workers in question.

In late November, the report by Nick Clark and Eva Herman of Middlesex University Business School, Unpaid Britain: wage default in the British labour market, highlighted the case of security firm TSS Ltd, which in February 2016 was named & shamed by BEIS for owing no less than £1.742 million to 2,519 workers – still the largest sum of arrears owed by any of the 1,539 employers named & shamed to date, and representing 22% of that £8 million boasted of by Margot James. By examining the firm’s annual accounts lodged with Companies House, Nick and Eva found that, in the 2014 and 2105 accounts, the firm had made provision for £1.736m of “payroll liabilities”.

This rather disturbing finding prompted a written Parliamentary Question to BEIS by Caroline Lucas MP, asking “how much of the £1.74 million of minimum wage arrears owed by TSS Security Ltd and identified in the BEIS press release of 5 February 2016 has been paid to the workers in question”. To which the Answer (on 11 January 2018) was: “HMRC do not divulge information relating to an individual or company for reasons of confidentiality”. Which is a little odd, given that, in February 2016, BEIS and HMRC were happy if not delighted to divulge that TSS Ltd owed £1.742m of NMW arrears to 2,519 workers. Perhaps, as David Davis might say, that was then, this is now.

However, the Treasury’s Answer of 11 January went on to state: “Where arrears are identified HMRC complete assurance checks to ensure employers have repaid the arrears owed to workers. If employers do not repay arrears to workers HMRC will pursue civil recovery of arrears through the courts.” Which begged the questions: how many employers HMRC initiated civil action against in pursuit of unpaid minimum wage arrears in each year since 2010; and what is the total sum of unpaid minimum wage arrears recovered through such civil action?

Cue further Parliamentary Questions by Caroline Lucas MP, and we learnt last week that, since 2010, HMRC has initiated civil court action for non-payment of identified NMW arrears against no fewer than 532 employers. However, HMR is unable to say how much was recovered in total by this legal action, or – somewhat incredibly – even how many of the 532 civil court claims resulted in the recovery of unpaid NMW arrears. Perhaps the National Audit Office should ask, next time they are in HMRC.

Which perhaps explains why BEIS press releases and submissions to the Low Pay Commission always refer only to the sum of NMW arrears “identified” by HMRC enforcement, never to the sum of arrears actually recovered for the workers in question.

I can imagine ministers and senior officials feeling rather smug at having got away with this sleight of hand for so long. But maybe they should instead be thinking about whether they need to be doing more to ensure that the ‘levying of millions in back pay’ actually does have consequences for the wallets of the law-breaking employers in question. 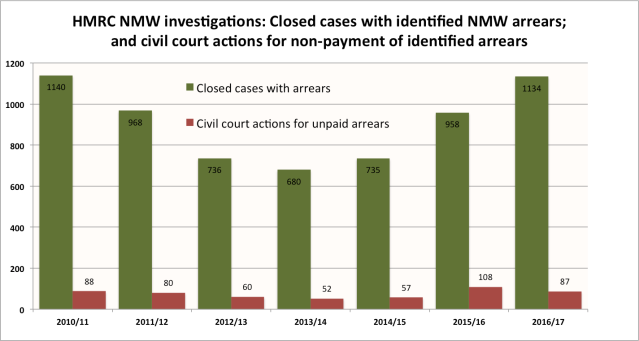 Wonkypolicywonk is a policy minion, assigned wonky at birth, who has been lucky enough to work for two of the very best MPs in the House of Commons, and for Maternity Action, Working Families, Citizens Advice, the National Audit Office, the Law Society, and Amnesty International UK.
View all posts by wonkypolicywonk →
This entry was posted in Workers' rights and tagged National minimum wage, NMW enforcement. Bookmark the permalink.

2 Responses to Honey, I shrunk the NMW arrears